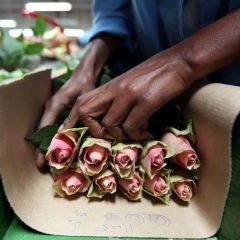 As wholesale rose providers in Los Angeles, we import our fresh cut flowers from family-owned farms in Ecuador. South America has long been a hotspot for high quality roses, but other nations have also seen the benefits. African countries like Kenya have made fresh cut flowers one of their most profitable industries but that hinges on keeping costs down. New export duties could potentially cut into that profit, and these countries have reason to be worried.

On October 1st increased import duties from Africa to the European Union could see taxes of cut flowers increase from between 8 and 12%. It will go into effect unless Kenya comes on board to sign the Economic Partnership Agreements.

The Kenya Flower Council has met with the European Floriculture Forum to talk about the deal. Apparently there have been disagreements between EU negotiators and the East Africa Community going back to March. They couldn’t agree on how to levy export taxes on goods heading to the EU and also couldn’t find common ground on a clause that would keep East Africa nations from trading with partners in areas where the EU doesn’t have preferred treatment.

The clock is ticking and not finding an agreement would see an increase on the 120,000 tons of fresh cut flowers that are exported from African nations to the EU each year. In effect, the East Africa traders might no longer be competitive in the EU market.

Even reaching an agreement within the next month might still not give them enough time to hit the October 1st deadline as ratifying individual parliaments can be a very lengthy process. Since the Kenya annual worth of cut flower exports accounts for 1.6% of the nation’s entire GDP, it’s understandable why this is such a major issue. And it’s not only flowers that will be affected, but fruits and vegetables will also see increased taxes.

At Flowerlink, roses are our business. We bring you the finest roses from Ecuador directly to your business within three days of being cut so you know they are as fresh as they can be. If you have questions about Flowerlink’s relationship to our rose providers or want to see our roses for yourself please contact us anytime.

What Does the Color of Wholesale Roses Say?