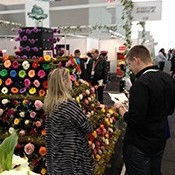 Florists, wholesalers, retailers, breeders, professional horticulturalists, and many other floral specialists from around the world will swarm Chicago at the end of the month for the annual World Floral Expo.  Since 1999, the World Floral Expo has brought the international cut flower industry together under one roof, but this is the first year it will grace the Windy City.

The event has been put together by Netherlands-based HHP Exhibitions since it began 15 years ago.  At that time it was hosted by New York City.  In 2004, they made the move to warmer weather and held the event in Miami before returning to New York in 2012.  So, why move to Chicago now?  According to event organizers, Chicago is not only one of American’s largest cities, but it’s also one of the country’s leading consumers of cut flowers.  On top of that, organizers want to expand the Expo to include buyers and sellers in Canada, and the event’s location near Chicago’s O’Hare International Airport will allow greater convenience for Canadian travelers.

The event strives to make sure that they earn the ‘World’ in their title.  Growers from major markets around the world will be represented including the USA, Colombia, Kenya, Ethiopia, Holland, and of course, Ecuador.  Ecuador, the country where Flowerlink grows our world class wholesale roses, will be well-represented at the World Floral Expo.  Nearly 30 exhibitors from the South American country will have their cut flowers on display.

California will also have a presence at the event as the California Association of Flower Growers & Shippers will have a CalFlowers booth to show off the benefits of locally-grown flower products.  Their booth will be kept company by hundreds of other individual stands and country pavilions that will have fresh cut flowers on display that are ready to be purchased and shipped that day.

Beyond seeing some of the best flowers the world has to offer, visitors to the World Floral Expo 2014 will also be able to attend panel discussions on the ever-changing distribution channels of fresh cut flowers.  They’ll also be able to see the latest trends in flower designs when six of the Netherlands’ top master flower designers put on detailed demonstrations.

The three-day Expo is a business-to-business event, free to attend by anyone active in the flower trade industry.  The World Floral Expo 2014 will take place at the Donald Stephens Convention Center in Rosemont from March 26th to the 28th.

You don’t have to travel to Chicago to find the best roses in the world.  We can bring them directly to you within three days of being cut at our world class Ecuadorian farms.  Flowerlink provides the best varieties of roses in bulk to Los Angeles florists, high end supermarkets, and LA event planners.

We always have the latest varieties that are certified fair trade, and we want to share them with you.  Contact us today to learn more about Flowerlink’s wholesale roses in Los Angeles!

Colors of Spring Wholesale with Flowerlink!